The use of thermal processing to control phase separation in atomic and molecular solids is a conserved motif for designing materials with tailored mechanical properties that spans antiquity, modern technology and the natural world. By contrast, thermal processing of colloidal solids poses significant challenges, including relatively slow dynamics and a lack of scalable materials in which colloidal interactions can be actively tuned and quenched. To overcome these challenges, we have developed a model thermally processable colloidal system based on nanoparticles in the presence of thermoresponsive polymers that allows for fine control over their interparticle attractions and resulting colloidal behavior. We show how this thermoreversible behavior allows access to a range of gelation mechanisms including dynamic percolation, arrested phase separation and glass formation, whose outcome can be selected through the path taken to the gelled state. In cases of arrested phase separation, we explore the analogy between thermal processing in colloids with that in atomic and molecular systems, including the kinetics and micromechanics of structural coarsening and the concept of a “time temperature transformation” diagram from which to design arrested morphologies. Ultimately, we show how the sophisticated control of gelation and arrested structure afforded by thermal processing can be used to tailor colloidal solids (and other materials from them) with widely varying and superior mechanical properties. 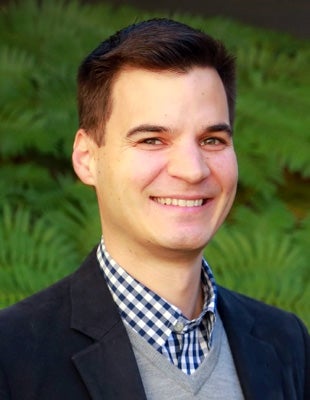 Matt Helgeson is an Associate Professor in the Department of Chemical Engineering at UC Santa Barbara, where he is also a faculty member and IRG co-leader of the Materials Research Laboratory (an NSF MRSEC). He received his B.S. in Chemical Engineering at Carnegie Mellon University in 2004, and his Ph.D. in Chemical Engineering at the University of Delaware in 2009. He performed postdoctoral research at MIT before joining the faculty at UCSB. Prof. Helgeson’s research focuses on designing and processing complex fluids with well-specified nanostructure, especially those involving colloids in structured liquids. Prof. Helgeson’s research has been recognized with a number of awards, including Early Career Awards from both the National Science Foundation (2013) and Department of Energy (2015), a Hellman Foundation Faculty Fellowship (2016), and both the Victor K. LaMer Award (2011) and Unilever Award (2016) from the American Chemical Society.