Evolutionary Design & the Physics of Life

In this lecture I draw attention to the theoretical work that places the phenomenon of design, evolution and life in physics, the biological and the geophysical realms together. I show that all evolutionary forms of flow organization are in accord with and can be predicted by the law of physics that governs evolutionary design in nature: the constructal law. I focus on us humans. We are evolving freely as the “human & machine species.” Evolution is visible and recorded in our lifetime, for example, commercial aviation, the cooling of electronics, and modern athletics, which is a special laboratory for witnessing the evolution of animal locomotion. Physics explains and predicts natural flow organization and evolution.

The lecture is based on the book: A. Bejan, THE PHYSICS OF LIFE: The Evolution of Everything (Macmillan/St. Martins Press, New York, 24 May 2016). 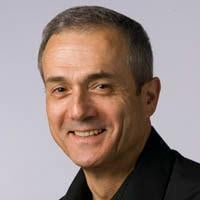 Adrian Bejan received all his degrees from M.I.T.: B.S. (1971, Honors Course), M.S. (1972, Honors Course) and Ph.D. (1975). He was a Fellow in the Miller Institute for Basic Research in Science at the University of California, Berkeley (1976-1978). At Duke University, he is the J.A. Jones Distinguished Professor. His research is in applied physics, thermodynamics and the Constructal Law as the law of physics that governs organization and evolution in nature. Professor Bejan is the author of 29 books and over 600 peer-refereed journal articles. His h index is 56 on the Web of Science. In 2001 he was ranked among the 100 most-citedauthors in Engineering worldwide. He received the highest international awards for thermal sciences, and is a member of the Academy of Europe and an honorary member of ASME. He was awarded 18 honorary doctorates from universities in 11 countries.