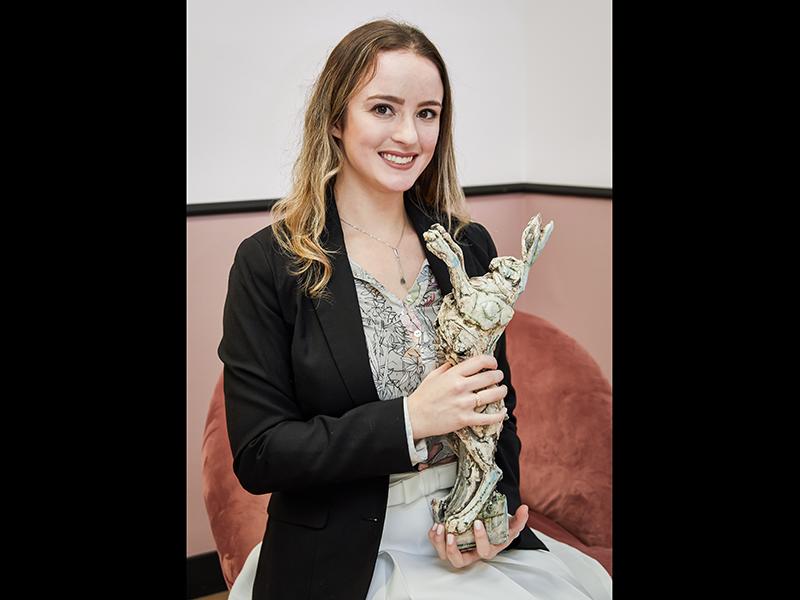 Carolina Motter Catarino, a graduate student in chemical and biological engineering at Rensselaer Polytechnic Institute, has been awarded £10,000 from the Lush Prize, which is a collaboration between cosmetics company Lush and research organization Ethical Consumer. As the largest prize fund for the complete replacement of animal experiments, it funds projects working to end animal research in toxicology (chemical testing).

The annual prize fund, launched in 2012, has now provided more than £1.8 million to support animal-free testing and campaigns around the world.

The Lush Prize is awarded in several key areas: science, training, public awareness, lobbying, and young researchers. Catarino is among 13 young scientists—from Brazil, the United States, China, Japan, Singapore, Australia, Germany, Luxembourg, and the UK—who each received £10,000 toward their projects.

“This year nominations for the Lush Prize were received from 38 countries, by far the highest so far,” said Lush Prize spokesperson Craig Redmond. “Judges continue to be impressed with not only the high quality of science and campaign initiatives happening globally to replace animal tests, but also the integrity of young researchers who want to avoid using animals for both ethical and scientific reasons. We are delighted to once again be able to support projects across the world, not only financially but by raising their profile and showing governments, scientists, and the public that we all need to cooperate to replace animal testing with superior, human-relevant, alternatives.”

From the earliest successes in culturing live cells in a laboratory to the latest advances toward the development of complex tissues and organs, tissue engineering is impacting people’s lives. The first human tissue to be successfully engineered in the lab was skin. Typically, skin models employ scaffold materials that are derived from animals, along with human skin cells. A key limitation of these models is that they still fail in recapitulating the complexity of the human skin. For example, these models do not contain all cells present in the skin nor do they contain adnexal structures, such as hair follicles and sweat glands.

Catarino’s research has been focusing on enhancing the complexity of reconstructed skin models through substitution and diversification of non-animal derived scaffold materials, inclusion of additional cells compared to traditional models, and generation of follicular structures, all using 3-D bioprinting. This technology allows the precise placement of the bioinks containing scaffold components and cells at appropriate locations within the 3-D skin tissue. This project can help in the development of the next generation of skin models for screening of chemical compounds as well as clinically superior skin grafts.

“Carolina is an exceptionally motivated and talented young scientist,” said Pankaj Karande, associate professor of chemical and biological engineering and Catarino’s adviser. “She combines her passion for research with diligence to find impactful solutions for human health. Her doctoral thesis on 3-D printing of human skin has the potential to develop human-relevant models for efficacy testing while reducing the dependence on animals in research. Furthermore, her work can provide novel avenues for engineering human tissues in the lab for regenerative medicine and therapies.”

Winners were honored at the Lush Prize Awards Ceremony in London in November. They also had the opportunity to participate in a networking event that brought together scientists and campaigners from around the world to discuss potential collaborative projects.

To watch a short video about Catarino’s research, as well as a list of all the winners and their projects, go to http://lushprize.org/2017-prize/2017-prize-winners/.

Catarino’s research fulfills the vision of The New Polytechnic, an emerging paradigm for higher education which recognizes that global challenges and opportunities are so great they cannot be adequately addressed by even the most talented person working alone. Rensselaer serves as a crossroads for collaboration—working with partners across disciplines, sectors, and geographic regions—to address complex global challenges, using the most advanced tools and technologies, many of which are developed at Rensselaer. Research at Rensselaer addresses some of the world’s most pressing technological challenges—from energy security and sustainable development to biotechnology and human health.